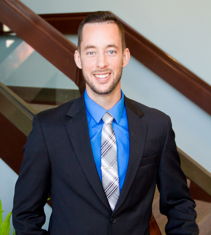 Originally from Mount Washington, Tyler has always called the Louisville area "home", even when away.

He began his career working in Clark County, Indiana as a Deputy Auditor; primarily dealing with property taxes and Delinquent Property Tax Sales for the county. In 2011, Tyler moved to Colorado Springs, where he then stepped into the realm of Property Management; working with Multi-Family residential communities. After moving to Hawaii in 2013, he was able to "give back" to our nations military by working with them in securing military housing, and assisting with the management of over 7800 Army owned-homes across the island of Oahu. He obtained his Real Estate Salespersons' license from the State of Hawaii in 2015.

Returning to his home roots, Tyler joined RE/MAX Premier Properties in August of 2016 as a Client Care Specialist. In his spare time, he can be found either at the gym, spending time with friends and family, or catching up with snuggles with his fur-baby Koa - even though she hates it!

Please enter your information below