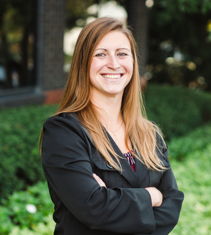 Megan graduated from Bellarmine University with a degree in history and then earned a second degree in paralegal studies at Madonna University. Originally from Michigan, Megan came to Louisville to play field hockey at Bellarmine and then made Louisville her permanent home in 2012.

Megan joined Jay T. Pitts and Associates as Office Manager in 2013 and ultimately assumed the additional role of Client Care Director.  With the opening of RE/MAX Premier Properties, Megan transitioned to office manager with bookkeeping and general oversight responsibilities for the brokerage. She spends most of her spare time coaching field hockey, playing with dog Nym, and catching up with friends and family.

Please enter your information below